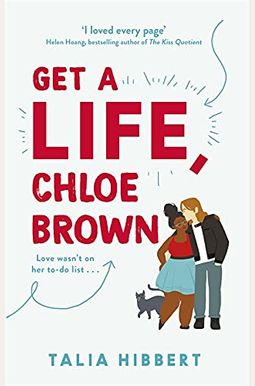 This book follows the life, or lack thereof, of a chronically ill Chloe Brown. She is in her mid twenties, and after her life literally flashes before her eyes, she decides she wants to live more. She creates a list of what she wants to accomplish, and crosses the first one off by moving out. Her superintendent, Redford, seems to hate her. She seems not to have a liking to him either. What could possibly happen?

My Review (with spoliers)

Reading this book, I had no knowledge of what it was about. It kept popping up on my For You page on TikTok. When looking for books with black protagonist that didn’t have race as the central focus, I kept seeing it. I bought it probably a year ago now and I can’t believe I waited so long to read it.

I loved this book, wholeheartedly. It made me smile, made me cry, made me hot, and made me blush. Even though Chloe and I live in different countries, (the story is set in England), and we live with different diseases, I related to her more than I have any character.

The way this story talks about chronic pain and anxiety, which Redford experiences, is pretty on point with what it is like to live with them both, at least for me. The book breaks down what it is to put our projections and insecurities onto other people. It shows that things may not be the way they seem and first impressions are only a piece of who someone is and what they are like. It shows you never really know what people are going through. It also does an amazing job of switching between narrators, going back and forth between Red and Chloe, throughout the book.

Chloe and Red’s story is a classic enemies to lovers trope. It is also a love story between differing classes-no one is stopping them from being together, but Red often feels she’s being snobbish and judgey because she comes from wealth. They’re not exactly enemies, but they both started off not liking the other because they thought the other one didn’t like them. Their relationship is full of banter, lust, and a genuine understanding of each other. They have both been through traumatic experiences and put a pause on what they wanted to experience out of life in order to process and heal (and to avoid vulnerability).

This book contains some steamy moments written in detail. After Red’s masterbation scene, the sexual content comes in thick.

The ending is a little rushed. As expected, they get into a fight, however the reason behind it is on brand for both of their personalities. Red overhears meaningless sex being on her list, which hurts because he recently admits to himself that he loves her. He begins to feel like his ex made him feel- unimportant and as if he is being used. In Chloe’s case, he feels like he is only around to cross items off her list.

He also overhears that he has been added separately onto the list and it confirms his assumption in his eyes. He tries to remember that Chloe isn’t like his ex. He knows how he is feeling doesn’t make sense. Chloe even assures him his being in the list is a good thing. But in the midst of his anxiety attack, he doesn’t hear her and he leaves, which is a trigger for Chloe, who has had friends and a fiancé leave her.

The scene honestly made me really sad. At first, I was upset at his jumping to conclusions. Then I remembered that anxiety makes things that you know aren’t true make sense. It takes you out of reality. He was in an abusive relationship and has PTSD from that. His outburst was understandable. Her shutting him away for leaving easily, wasn’t right either, but was understandable. They both triggered each other. Their reconciliation is in the last couple of pages. It’s sweet. It showed he enjoyed learning about her.

Overall, this book was great. It was an easy read. It flowed beautifully. I wanted to know what would happen next and when they would finally get together. It was a slow burn and I was happy to experience it. I don’t often read books again, but I would read this one again. I 100% recommend.